The rage of one man is nothing to fear.  It is generally pointless, aimless, and like a flash fire burning hot for moments, before burning itself out.  It is a smoldering cigarette, extinguished by mere chance, or the proper placement of a boot.

But sometimes, that smoldering cigarette catches fire to nearby grass or leaves, it spreads and spreads till you see entire California towns evacuated due to raging wildfires.  The same way, rage can spread from one man, to another, to another, and another.  The rage of two men can be dangerous, but is directed in a single direction.  The rage of many, like a wildfire, will consume everything around it.

Today, London is consumed by rage.  The heat has become so widespread, that few could probably tell you from where the initial spark came.  The problem with civil unrest, is that it’s victims are not the government, nor the authorities, nor any of the people who were in any way responsible for the unrest.  The victims are people, just like those whose rage has consumed them, just like the people who are now victimizing the innocent, just because they can.

Civil unrest made us what we are as a nation.  It is a great and powerful thing.  It molded us into the single most powerful democracy on the face of the Earth, but it has lost its way.  Not just in the U.S., but in London, as well.

I have been in a position to see a few riots, and to witness their aftermath.  What was once a means of expressing displeasure has become a means of causing senseless destruction and committing senseless thefts.  From the recent riots in Canada, sparked by the simple losing of a sport, to the current riots in London, which were at least partially sparked by a police shooting, as well as slashes in government spending.

I will make no judgements of who is right and wrong in those issues.  I was not there for the shooting, and I am not an economist.  Where I will make judgement is of the people who have used this unrest for the sake of looting stores and burning businesses to the ground.  Did the owner of a family business that had existed for generations pull the trigger than gunned down a man.  Of course not.  But they burned his business to the ground.  Did the manager of an electronics store slash government spending.  Not at all, yet it is his storefront that has been destroyed and his stock that has been stolen.

The riots will come to an end.  All rage, no matter how severe, eventually burns out, but the victims will still have been victimized.  Meanwhile, people who would never throw a brick through a storefront or steal high-priced sneakers on their own are in stores, taking whatever they can carry.  And tomorrow, when the riots are over, when they can no longer hide behind the name of social unrest, they will be simple thieves, minor criminals.

If by some chance, one reads this blog someday, on a laptop stolen in the name of some person they cared nothing about, or some budget cuts they really didn’t know about in the first place, I ask that person to look hard at themselves, then click to another page, because I don’t want you being part of my world, even the little piece that is this blog.

Rage, I will always understand, even if I don’t agree.  Parasitic scum, however, will never have my sympathy. 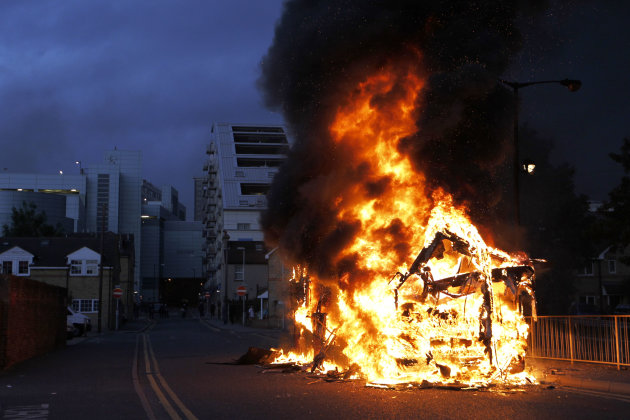 Writing: 3000 words on a short story, re-writing past longer short for submission

Currently reading:  What Dreams May Come by Richard Matheson, Strunk and White’s Essential Guide to Style, Burning Chrome by William Gibson, On Writing Horror by The Horror Writer’s Association

4 thoughts on “The Rage of One Man”